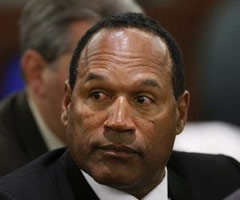 The former football star was found guilty in early October on all 12 charges, including conspiracy and assault with a deadly weapon during his gun point robbery of two sports memorabilia dealers in Las Vegas. Judge Jackie Glass said the issues raised by the lawyers for Simpson were insufficient grounds for a retrial as well as the defendants request for bail pending their sentencing. Simpson’s sentencing is set for December 5th where he faces a mandatory prison sentence up to life. Although Simpson was acquitted in the infamous murder of his wife and Ronald Goldman, he was found liable in the civil case that followed which ordered him to pay 33.5 million dollars. Simpson, however, has repeatedly said he will not pay the settlement. Following the most publicized trial of the century it’s hard to imagine an impartial jury even fourteen years later. Then again when you publicly get away with murder you probably shouldn’t hold people at gunpoint over a Heisman trophy.