I’d say “thank God” this one happened in Canada and not here, however, I could see this easily happening on our great country. On May 30, 2008, an educational assistant who works in a special education class with five autistic children at Terry Fox Elementary, made a shocking allegation. She alleged that one of her students, 11 year old Victoria, was being sexually abused. The school then immediately contacted the Children’s Aid Society (Florida’s equivalent of the Department of Children and Family (DCF)) who immediately took action.

The teacher didn’t hear allegations of abuse from the 11 year old autistic child. Rather, she heard the information from a psychic. Yes, I said it…a psychic…a psychic who had never met the little girl. Apparently, the teacher went to see a psychic who asked the teacher if she works with a little girl with the initial “V.” When the teacher said, “yes,” the psychic replied, “Well, you need to know that this girl is being sexually abused by a man between the ages of 23 and 26.” 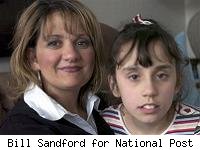 The girl’s mother, 38 year old Colleen Leduc is a single mom working hard to support herself and her 11 year old autistic daughter. She was sick to her stomach when told that school officials were reporting these false allegations. Leduc was told by officials at the school that the school is required to report suspected abuse if there are “reasonable grounds.”
Fortunately, the case was dismissed, however, Leduc is considering legal action. She fears that next time they might simply choose to take out a Ouija board and/or hold a séance to determine whether something improper took place.