BERKELEY HEIGHTS, N.J. (CBS 2/1010 WINS) — A New Jersey teacher is under arrest, accused of teaching students some scandalous and illegal behavior – and doing it all out of his own home. 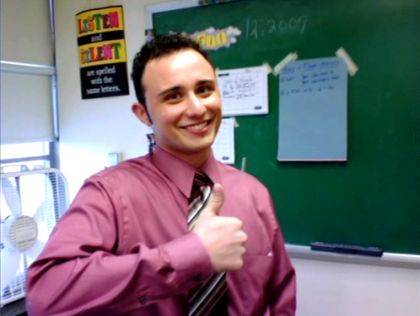 There was a visible police presence at Governor Livingston High School in Berkeley Heights on Friday as new questions and concerns came from both students and parents.

The topic of those questions was science teacher Frank Melchiorre, now suspended with pay for allegedly engaging in illegal extracurricular activities in his own apartment – with students.

“If the allegations are true, he’ll need to be dismissed, and hopefully he’ll do some prison time,” one parent said. “But let’s find out what the story is first, I think.”
Morris County prosecutors say the 26-year-old, hired in the district four years ago, is charged with possession of marijuana and drug paraphernalia, providing alcohol to persons under the legal drinking age of 21, and allowing underage persons them to drink in his home.

“On the first day of orientation, when we saw him, he looked like a student, and he was like, a little bit more interactive,” said sophomore Kerry Mosier.

Melchiorre was known for his outgoing personality in the classroom and it was apparently no secret he socialized with students outside of school.

“I thought it was tutoring, and then I heard all about this, and it was just very upsetting to me that kids, like my friends, would go there and do that with him,” said senior Joey Disarno. Asked if there were drugs and alcohol involved, he said “uh huh, it’s very upsetting.”
Galal Galal manages the pizza shop a few doors down from Melchiorre’s apartment in downtown Chatham. He said he often saw teenagers hanging around the apartment’s front entrance.

“You could tell they’re either high or a little bit drunk, especially when they come in here, get food. I personally don’t like it because I have kids in school and I don’t want to see my kids in the same situation where these kids are,” Galal said.

There’s growing support for Melchiorre on his Facebook fan page, but the teacher, who’s now staying at his parents’ home in Mount Arlington, is lying low.

While no one answered the door, school officials in Berkeley Heights say the matter is anything but closed – and county prosecutors’ criminal investigation continues.

Prosecutors have not disclosed whether the alleged incidents involved current of former students.