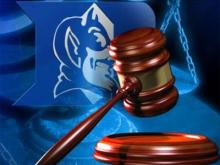 Just when you thought the Duke Lacrosse story was over, a new lawsuit begins to take shape. The family of one of the accused Duke Lacrosse players has told the alleged victim that if she publishes her memoire about the 2006 lacrosse team party, where she had been hired to perform as a stripper, that they will bring charges for libel and slander. The woman, Crystal Mangum, who appeared publicly for the first time since making the accusations more than two years ago, says in her book that she is not “looking forward to opening old wounds” but that she had to defend herself. “I want to assert, without equivocation, that I was assaulted,” she writes in “The Last Dance for Grace: The Crystal Mangum Story.” After a disastrous local prosecution that led to the downfall of the district attorney, the state attorney general’s office concluded there was no credible evidence an attack occurred. But regardless of the criminal prosecution, do you think Ms. Mangum should be allowed to publish her memoire without facing civil penalties or should her voice be silenced?