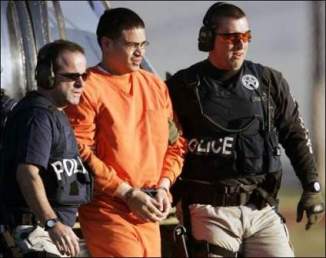 And now conclusive proof that judges don’t always automatically do whatever government prosecutors ask of them. U.S. District Judge Marcia Cooke rejected the government’s passionate request that Jose Padilla and two other fellas who were convicted of terrorism charges be sentenced to life. Cooke sentenced Padilla to 17 years and four months in prison after jurors found that he participated in a South Florida based conspiracy to assist Muslims in “violent Jihad.” Cooke rejected the government’s argument that Padilla’s actions were comparable to the Oklahoma City bombing and/or the September 11th , terrorist attacks. Cooke stated, ”There was never a plot to harm individuals in the United States, ” Also, Cooke found that “There was never a plot to overthrow the U.S. government.”
What is most significant to me is that Padilla was facing 30 years to life under the Federal Sentencing Guidelines. Judge Cooke had the courage, in today’s conservative climate, to exercise her discretion and to punish Padilla as she deemed appropriate. A rare act in today’s justice system.